According to Wikipedia ‘Serial Experiments Lain‘ is a Japanese franchise that includes an anime, a game and several artbooks and other publications. It was broadcast on TV Tokyo from July to September 1998. 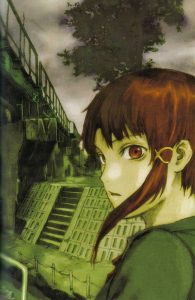 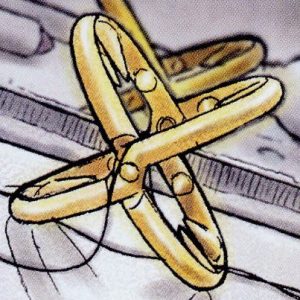 The series focuses on Lain Iwakura (character design by Yoshitoshi Abe), an adolescent girl. What is important here, is that her hairstyle has also received particular attention. The haircut is asymmetrical (to reflect Lain’s unstable and disconcerting nature) and a tail is held together by a X-shaped hairclip, designed as a mystical symbol. However, in the anime the hairclip is never even seen being unfolded into its distinctive cross shape.

It is fantastic to see this actually inspired someone to think about a 3D printable model and to make it available on Shapeways. 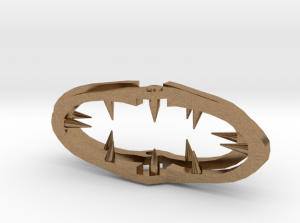 The accessory is sold in precious metals  as raw brass (with a slightly rough antique finish), polished bronze and gold plated, but also in nylon plastics, so you can choose any color.

It is a pity Shapeways does not provide a picture with someone who actually wears the pin. I decided to order one, to see if the technique actually works to keep hair together… 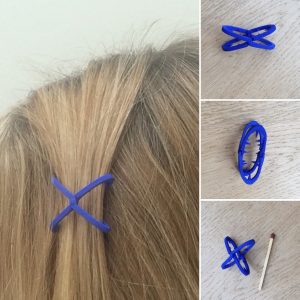 I ordered the X-shaped hairclip in blue plastic. It’s printed and finished really beautiful and after

assembling the two parts you can actually open and close it . But the hair clip is a smaller than I expected, and due to the pointy spikes on the inside it is not easy to slide the hair clip to the top of a lock of hair. What I take as a learning for my own prototyping.

Afterthought : when comic and cartoon style icons can inspire the creation of 3D hairpins, likely you ain’t seen nothing yet.